As mentioned last week, the pictures I took during my trip in Sri Lanka were far too many to fit just in one post, so here I am again, sharing with you a few lines and some other images of the ‘Resplendent Island’ and its culture, heritage, music, landscapes and food. 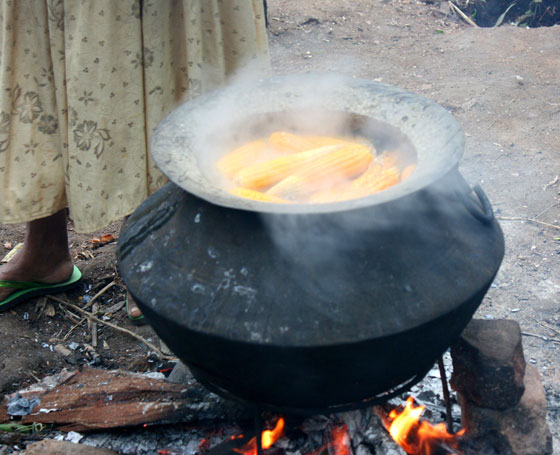 While hitting the road, there is always time to stop for a healthy, juicy and sweet bite. 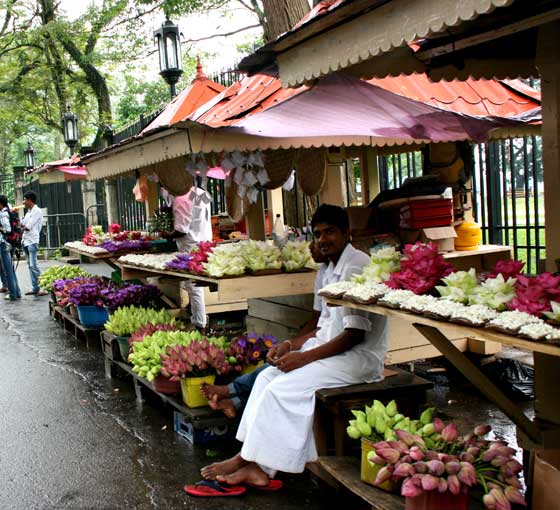 Kandy, stronghold of the last Sinhalese monarchy, is the home of the Dalada Maligawa – the Temple of the Tooth Relic. This is one of the most sacred and worshipped Buddhist places in the world, which safeguards one of Buddhism most venerated objects. As the story goes, once reached Nirvana, the Lord Buddha was cremated and some of his mortal remains, including some of his teeth, were rescued intact from the ashes.  According to legend, the relic had reigning power: whoever had it was believed to have the right to rule the island. The Sri Dalada is now housed in seven casket, the outer one – 120 cm – is of silver and all the other ones are made of gold. For its immese value, the relic is rarely displayed in public.

Devotees buy flowers to place before the Tooth Relic, in particluar lotus flowers, symbol of purity and enlightenment.

Pilgrims are invited to leave the shoes at the entrance and to walk barefoot within holy areas. This also applies to people’s home since Sri Lankan (and myself actually) never walk around at home with shoes on.

The Temple of Tooth was built within the Royal Palace complex of the Kandyan Kingdom, due to the ancient tradition that stated that the Monarch was the protector of the sacred object through which he had the power to rule the land. Today only part of the original buildings remains. 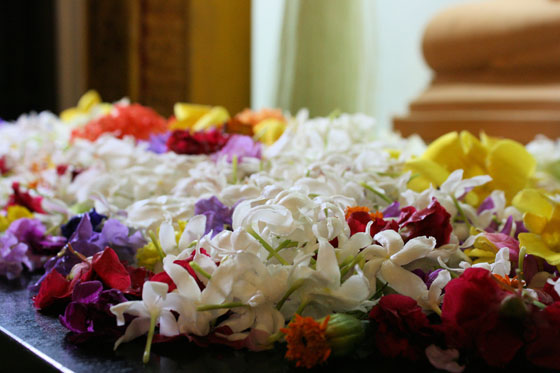 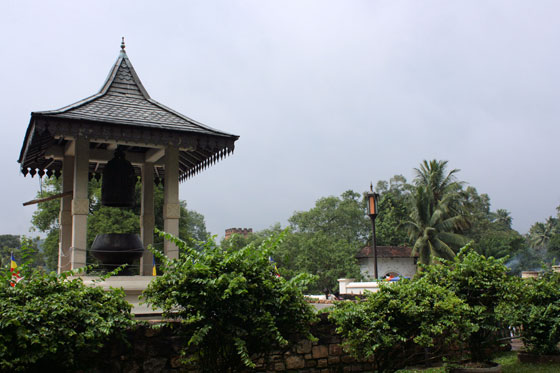 I did feel charmed by the Kandian spiritual atmosphere, its aristocratic and colonial buildings and its history as the last indipendent bastion of the Sinhalese before falling to the Portuguese and Dutch. What really made me get going though was the idea of drinking the best cuppa ever.  That’s what happens to Italian people after spending several years in the UK. Tea-drinking is contagious and fridges with weird notes saying “Wouldn’t be dreadful to live in a country where they didn’t have tea?” are a clear sign of that.

The highlands surrounding Kandy provide the perfect climate that favours the production of high quality, aromatic tea. Humidity, cooler temperatures and rainfall, combined with sunshine and mists, create the ideal environment for the crop that symbolise Sri Lanka in the eyes of the world.

Stepping in to a tea factory is a life-changing experience. My sense of smell was seduced by one of the most enchantic flavours ever. I have to admit that I must have looked rather weird as I couldn’t stop sniffing around in the attempt to store up that scent in my mind. Warm, velvety, endearing. It’s not just a smell. It’s the smell of tea. The real one.

Well, I have to say that in Sri Lanka, I did not only drink tea but I also ate. And when I say “ate” I mean ATE A LOT. Their cuisine is a rich melting pot, the result of a unique fusion of local produce with recipes and ingredients brought on the island over the centuries by Indians, Malays, Moors, Portuguese, Dutch and English. Sri Lankan meals are extraordinarily colourful,with dishes that range from the warm yellow of the dahl to the reddish-brown of the beef curry, going through the vibrant  green of  the kale mallung to the bright orange of the pol and seeni sambols.

Local people love spices. Full stop. Each meal is a triumph of chilli, cardamom, turmeric, cumin, curry leaves, black pepper – none of them overpowering but rather the exotic expression of the refinement of their traditional cuisine, shaped by what nature offers on the island.

One of the most typical dishes in Sri Lanka is rice and curry, a generous plate of plain rice accompanied by meat, fish or vegetable curries, some of them lively spicy. Many Sri Lankan dishes are believed to be among the world’s hottest for the use of schorching hot chillies. To be honest with you, during my stay it never happened to me to get teary eyes while eating, although one day I felt a bit gutted looking at a 9 years old dining companion eating a challenging curry with total non-chalance. I should have started at an earlier age – shame on me.

Be careful. Pappadams are highly addictive.  I still crave them. 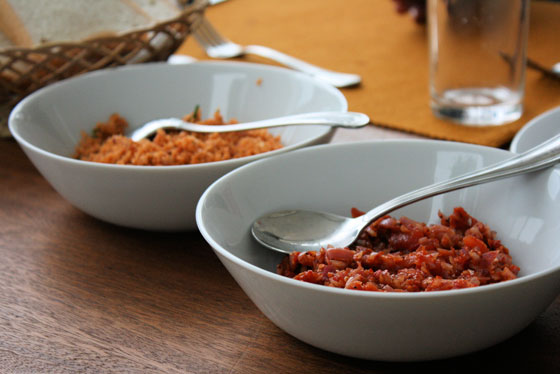 Look at the left-hand side of the dish. That’s the wambatu moju, sweet and sour fried aubergines with turmeric powder, ginger, curry leaves, cloves and chilli – topic of the day with the chef, fascinated by the idea of experimenting with a Sicilian caponata, while I was writing down the list of spices I would need for my first Sri Lankan recipe. Culinary twinning.

The buffalo curd with kitul treacle, made from the sap extracted from the inflorescence of the kitul palm, Caryota urens, a centuries-old food recipe. The sap is boiled down to a dark brown syrup, whose taste has hints of dried figs, dates and caramel. The kitul treacle has less calories than sugar and a higher nutritional content which make it a common ingredient in Ayurvedic medicine.

After such a big lunch, instead of rolling down the hills, the best decision was to take a tuk-tuk ride. As you can see, there was a queque though, so I decided to have a look at the fruits stalls and buying something. 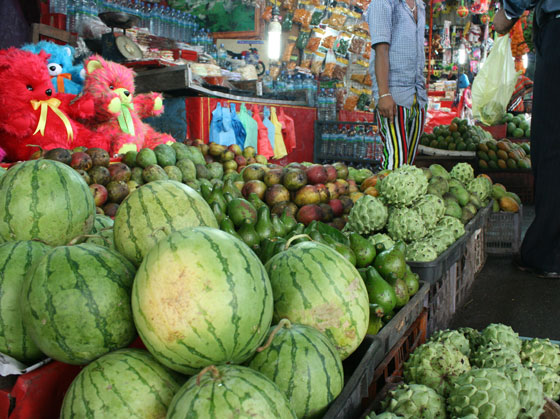 Jumping on top of a pile of mangos to land on a shocking pink teddy bear. Life is always full of surprises. 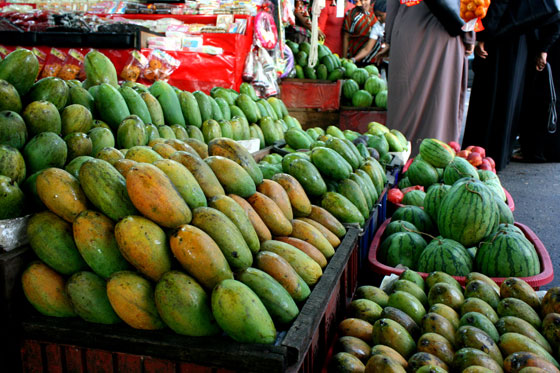 Sri Lanka has seduced travellers for centuries  and my visit confirmed the island’s legendary reputation, leaving me enchanting memories of idyllic sceneries, captivating flavours, traditions which have existed since the dawn of time and a few pictures I hope you enjoyed.

One thought on “The ‘Resplendent Island’ – Part 2”

It’s time! Come on! And, on the table, at the midpoint of summer, the tomato, star of earth, recurrent and fertile star, displays its convolutions, its canals, its remarkable amplitude and abundance, no pit, no husk, no leaves or thorns, the tomato offers its gift of fiery color and cool completeness. Pablo Neruda, Ode to Tomatoes